skip to main | skip to sidebar

I wrote down everything I read and began writing my own first novel...

This blog aimed to contrast what I was reading in in 1975-79 with the same month, week and day, 30 years later in 2005-2009. I'm leaving the blog up in archive mode, blogging in real time on Live Journal--and still writing novels.

Lynne Murray's Live Journal and Bride of the Dead Blog

A Book I Know I Won't Read

This is just a quick post. On the NAAFA mailing list someone posted this link to Kim Brittingham appearing on the Today Show to discuss her experiences as a fat woman reading a book entitled Fat Is Contagious. Brittingham made the cover to dramatize some of the experiences she has had as a fat woman riding public transportation in New York. If you can get video on your computer here's the URL--

I really like the poise and positive attitude she displays.

One reason no one read this book because it does not exist--except as a cover.
Posted by Lynne Murray at 2:10 PM No comments:

One of my guilty pleasures is award shows. My excuse is that I need to keep up with the current films, music and Broadway plays. Last Sunday the pleasures were guiltier than usual when Grammy Awards had the added soap opera of whether singer, Amy Winehouse, who was nominated for six awards, would be able to attend despite visa problems and substance abuse issues. Ironically one of the songs she won an award for was "Rehab" explaining why she wasn’t going to rehab, while one of obstacles she faced in attending was the fact that she actually is now in rehab.

The Grammy awards, however, were scheduled opposite the PBS airing of the first few hours of Pride and Prejudice, the Colin Firth version, so I missed them. I was still curious enough about Winehouse that I checked her out online
Amy Winehouse

She has an amazing voice that is strong enough to hold up against a baritone saxophone and a Phil Specter-style Wall of Sound. The songs on the Back to Black album stand out like dark, twisted jewelry in the glittery "girl group" setting. Layered, ironic, funny, dangerous, magnetic, sensual. Grafting her bad girl persona onto the girl group sound demonstrates a wicked genius. Those songs invariably feature lyrics like: "Nothing you can do can make me untrue to my guy." A major contrast to Winehouse's "You Know I'm No Good." I haven’t been so amused since I heard a gay male group sing "He’s So Fine."

What, you may well ask, did this teach me about Jane Austen?

Well, the public buzz about Winehouse is that she’s a bad role model. (Goodness, a popular musician being a bad role model! Most unusual.) Sorry, my point was that she’s taken a whole raft of personal problems and turned them into gorgeous works of art.

Jane Austen, a lifelong impoverished spinster who struggled with living on the crumbs of family charity, didn’t even see all her novels published in her life. Yet she created a world so seductive that many of us go there repeatedly.

PBS aired a biographical film, Miss Austen Regrets, on February 3rd that I did not post here about it just after I saw it because it was so painful for me to watch. The film tried to scrape up some romance in Austen’s not-very-eventful life. They turned excerpts from her letters to her sister and her niece into dialog. I’ve heard others say that they found these exchanges witty, but they really don’t dramatize well. Nothing in her novels suggests that she would be that cruel and bitter in a social setting. The problem is that, unlike the surgically deft dialog in her novels, the scathing wit in Austen’s letters was never meant to be spoken aloud in social setting. It was very private and meant for intimate correspondents she trusted.

In the last scene of Miss Austen Regrets, after she and Jane agonize about their poverty and Jane dies, the surviving sister, Cassandra, burns most of her letters. Really the only thing I took away from that film was a more complete understanding of why this was necessary. People look at Austen’s life and want her to be one of the heroines of her novels, but she is their creator, and that is so much more. It would take a biographical genius to portray Austen's life in a way that showed the magic of what she created in her fiction.

We want artists to be saints, but they have other work to do. Their task is to built dream vessels to transport us into their own worlds, to share their visions, songs and stories. Then like all other humans, the artists have to return to real life to deal with it as best they can can.

I have been through substance abuse problems both as a participant and an observer, and I can see how Amy Winehouse is walking a narrow path at the edge of a cliff. I hope she can come to safer ground soon. In the meantime it’s not fair to try to force her to also carry the burden of being a role model, just as it’s cruel to jam Jane Austen into the role of disappointed spinster--we don't know her well enough to say that and conversely we know her too well to limit her that way.

Breakdown, N. S. Sotherland
My note: A psychologist’s personal account of manic depression with some gossipy put-down sketches of the founders of the main schools of psychotherapy.

By Force of Will, the Life and Art of Ernest Hemingway, Scott Donaldson
My note: Much better than Hemingway & the Sun Set, which was remarkable only for a picture of Duff

The Professor Game, Richard D. Mandell
My Note: Fairly witty, which is rare, but with that characteristic poverty of joie de vivre one finds among existentialists. So I’ll say witty and gritty.

The Vagabond, Colette
My note: Wow.

Streets, Actions, Alternatives, Raps: A Report on the Decline of the Counterculture, John Stickney
A 1971 view

The Devil in the Shape of a Woman, Carol Karlsen
Interesting book, originally a dissertation about who was singled out as witches n Colonial New England and why. Many insights into fears of women that are still alive and flourishing.
http://www.iath.virginia.edu/salem/scholarship/karlsenrev.html
Posted by Lynne Murray at 11:31 AM No comments:

Do you think a better title would be "...About Courthouse Drama" or "...About the Law"? The book will encompass both of those, and I am entertaining suggestions up until the end of February.

Holly Lisle's online shop, where my ebook will be soon!

Okay, now for the freebie! It is a very useful 52-page ebook, in the form of an Adobe PDF file that Holly created from her Create-A-Plot Clinic. I have the Adobe file and permission to send it out free, but I have hit the limit of my expertise in blogger, so I am hoping I can send it to anyone who wants it as file attachment. You can email me at the link on this blog. I won't put you on a mailing list--believe me I don't know how to do THAT yet either--LOL! I hope to learn, but this is just a one-shot request thingie! If someone requests this and it doesn't work I will modify this post and try another strategy. I may be low tech, but I am nothing if not persistent!
Posted by Lynne Murray at 4:18 PM No comments:

Apologies if this shows up twice, it posted below a January post, I guess because I started it earlier. So I'm reposting and deleting the earlier one. A bit primitive but it should work.

This week I read David Roche's amazing book called The Church of 80% Sincerity. David was born in 1948 with a facial disfigurement called Cavernous Hemangioma (a benign tumor consisting of blood vessels), and he suffered further trauma through the medical treatments available at the time-- radiation scarring and many surgeries. His candor and wicked sense of humor put the reader at ease, just as he puts the audience at ease as a motivational speaker. David calls his face “a gift from God. He is quick to add that it is one of those gifts where you say, “Gee, you shouldn’t have.” I have a special fondness for books that make me laugh out loud, and I also value books that aim to foster self-esteem in people just as they are. This book has all that and more. David writes, "The church of the title is not a formal organization but a concept – the church of choice for recovering perfectionists."

I reviewed The Church of 80% Sincerity for Irked Magazine and I'll post a link when that review is available. His entire schedule and much more information is on his website, but I've posted his SF Bay Area event schedule Feb 11-20 for anyone who wants to meet this remarkable man.

Anne Lamott observed in her Foreword, "Everyone watching [David] gets happy because he's secretly giving instruction on how this could happen for them, this militant self-acceptance. He lost...the good looking packaging, and the real parts endured."

Whatever Became of Jane Austen and Other Questions, Kingsley Amis
My note was: Vitriol ordinaire

The Church of 80% Sincerity, David Roche
Posted by Lynne Murray at 5:18 PM No comments:

Bride of the Living Dead, June 2010 from Pearlsong Press

A romantic comedy for women who love horror movies too much

Who's afraid of the big bad 'F' word? Not us! Fat-positive fiction conversation

Pearlsong Press will publish a trade paperback edition of my new romantic comic novel, Bride of the Living Dead! Watch this space for the publication date.

The heroine is Indie film critic Daria MacClellan. Big, beautiful and rebellious, Daria, who is most comfortable in a monster movie poster T-shirt and blue jeans, finds that her wedding is hijacked by family drama. How did she sign on for a formal wedding planned by Sky, her perfectionist, anorexic, older sister? Daria adores her fiancé and she loves horror films, but her wedding seems to be spiraling downward in that direction. Will a picture perfect pink wedding turn her into the Bride of the Living Dead?

We'll be talking about reading and writing fat-friendly fiction in Pearlsong's http://www.pearlsong.com/pearlsongconversations.htm call-in teleconferences for July and August.

Who calls it "Frisco" and when that can land you in jail! 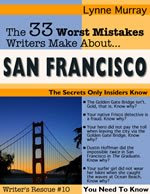 How to create a San Francisco-set story as fresh as Late Bake Sourdough bread!

For Writers to Avoid Legal Mistakes 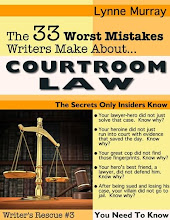 Want to hear more about Lynne Murray's books and writing?

Email murraymade@yahoo.com and I'll put you on the list to hear the latest.

With a little help from blog friends

W2W reminders from Jaki and Lynne 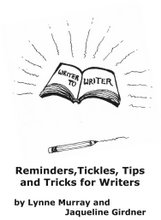 More on Writer to Writer!